Disabled Veteran Empowerment Network (DVEN) is proud to announce that they have been awarded the 2022 Leadership Award at the 7th Annual Vettys awards ceremony held by the Academy of United States Veterans (AUSV) on April 23, 2022, in Las Vegas, NV.  The Veterans Awards, or Vettys is an annual award presented by the Academy of United States Veterans (AUSV) to honor and give recognition towards members of the US veteran community for their outstanding work in supporting the American veteran community.  More about this can be gleaned from https://dven.org/dven-wins-leadership-award-for-veteran-suicide-prevention/.

Robert Hess, the founder of DVEN, says, “On behalf of our great staff and volunteers at DVEN, I was honored to be selected for the 2022 Leadership Award from among many outstanding non-profit organizations supporting veteran mental health. We are particularly proud of our Rally4Vets motorsports program that supports free service dogs for veterans dealing with PTSD. Our volunteer team deserves all of the credit. A huge ‘thank you’ to each and every one of them.” 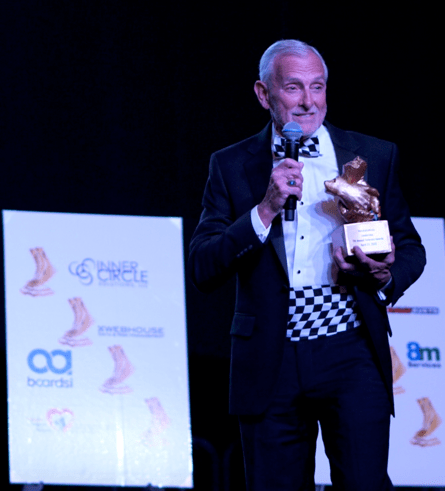 DVEN founder Robert Hess is an American Legion Life Member and also a member of the Legion’s Hollywood Post 43. The primary concern of DVEN is the large number of suicides in veterans.  The DVEN home page notes that as of the present time, there are 18 veteran suicides per day and there have been a total of 2,644 veteran suicides since January 1, 2022.

The problem is that post-traumatic stress disorder (PTSD) is a mental health disorder that affects many veterans who have experienced or witnessed a life-threatening event, such as a car accident, combat, sexual assault, or natural disaster.  Veterans usually suffer from feelings of being on edge, having upsetting memories, or having problems with sleep. And if these symptoms persist for over a few months, they could be suffering from PTSD.

With regards to the AUSV, more information can be gleaned from their website at https://www.ausvfoundation.org/home.  It is through their various social and philanthropic activities that AUSV seeks to inspire its members to adopt key values, such as empathy, leadership, and ambition, and to always go for excellence.  The people behind AUSV believe that collaborative communities can be used to offer genuine opportunities for society.  And by stimulating creativity within these cooperative communities, they hope to establish a new narrative for veterans and for all Americans.

The American Legion, which is one of the organizations supported by DVEN, wants to encourage veterans who believe they have symptoms of PTSD or depression to go to their local post and get in contact with other veterans.  The American Legion is also actively working to help prevent veteran suicides through their peer-to-peer support programs that are available in the over 12,000 American Legion posts all over the country.

Meanwhile, DVEN founder Robert Hess has chosen to support the Rally4Vets amateur racing program.  In this annual event, veterans, active duty servicemen and servicewomen, and veteran supporters compete in motorsports with the goal of providing support for disabled veterans suffering from PTSD.  All of the funds raised in this event are to be used for providing service dogs and suicide prevention programs for the benefit of disabled veterans with PTSD.  DVEN also has several other veteran programs and services, including those for women veterans, minority veterans, homeless veterans, mental health, PTSD, and adaptive sports and special events.

Launched in 2019, DVEN has established as its mission to identify those veteran organizations that are providing real support for veterans and to give them some monetary support. This is actually important because there have been a number of organizations that have been observed by the Federal Trade Commission and state governments to have other motives, instead of helping veterans. Their vision is to make the lives of veterans better by providing resources and information to help with their independence and safety to allow them to have the best quality of life possible, with the ultimate goal of achieving disabled veteran awareness and suicide prevention.

Those who would like to know more about DVEN and what they do can visit their website at www.dven.org, or contact them through the telephone or via email.

DVEN (Disabled Veteran Empowerment Network) is a program of the Cancer Journeys Foundation. The DVEN program was created in 2018, to support the thousands of veterans dealing with service-related cancers and PTSD.